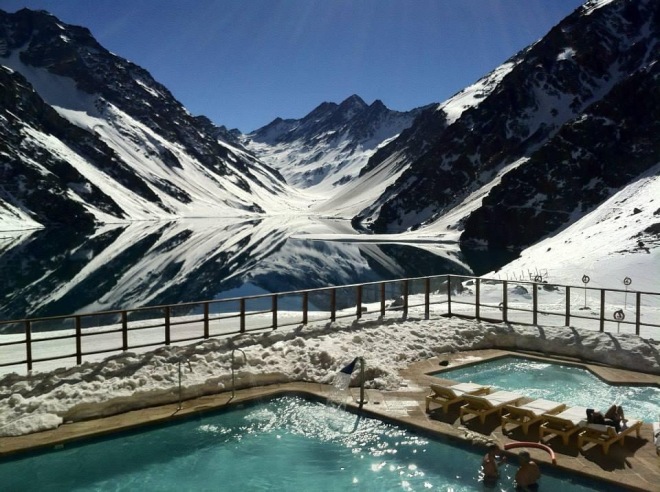 So July was filled with visitors and traveling locally from Santiago. We went to some wineries, the coast, the ski slopes, and Pomaire for ceramics. My friend Leah and her husband came July 12 to 20 and then Emilie came the day they left. I toured around with each of them and showed them what I knew. It was a lot of fun and I am glad I saved some touristy stuff to do with them. Leah came purely to travel but also to celebrate her and her husband´s one year anniversary while Emilie came with Habitat for Humanity to build an extension to some local houses.

I went to the coast with each of them but in separate directions and both were excellent. I still absolutely love Valpo but then add the beaches North and South of it and it´s pure bliss! Visiting Valpo this time we did the usual tour (street art, stairs and elevators, La Sebastiana -Pablo Neruda house-, Cerros -Alegre or Conception at least – and getting lost in passage ways) but included a harbor tour into it for the first time which was quite incredible once you are below the huge container ships anchored in the sea. This time I made it to ConCon (North) which is more known for seafood and surfing and to Isla Negra (South) where one of Pablo Neruda´s homes is (his favorite of 3 he had) and seems to be the favorite in general. Additionally, I have been training too so I got to run on the beach 2x which was excellent! ConCon we got a ride to (bus also available from Terminal Alameda – Turbus or Pullman) but Isla Negra we took a bus from Terminal Alameda direct (well, not a different bus, it does stop plenty though) to the town of Isla Negra (yes, no island that you head to just a town on the coast).

From coast to mountains because Summer up North is Winter here. With Leah we did a trip to two ski areas. Generally it is a sunny day up there with spectacular views no matter where you go but never go when it is snowing as you can´t see (no trees up there = white out). This happened once when I went to Valle Nevado, luckily this second time up it´s slopes were perfect. The snow in Chile is awesome and therefore skiing is wonderful so we wanted to make the most of my friend´s visit so we went again with a friend of theirs who drove us up but to Portillo this time. Likely the most gorgeous ski resort and definitely is the oldest in S. America. It is a never ending curvy road to the slopes (not advisable drinking the night before…) in fact the curves are counted out as you drive. Portillo is small but definitely won me over!

If you want to go to Valle Nevado, La Parva, El Colorado or Farellones slopes on your own from the city just reserve with Ski Total (transport and equipment) they are decently priced and leave from the Omnium Mall on Apoquindo (in between Metro Esc. Militar and Metro Manquehue) every day (ski season). Reserve here (click flag to change to Inglés).

Wineries were also on the agenda…although it is winter (I´d recommended in January instead). If I am still here I will put it on the to-do-list again. We went to the 2nd largest in the world, Conca y Toro which I found to be expensive but it easy to get to on local transit (metro and bus or taxi). The one we toured is Santa Carolina and it is one of the oldest in Chile and played a major part in Chile´s history (plus the tour was way better). To get here we took the train then walked and on the return managed to get a lift back to the city with an employee…ha ha we stayed quite awhile here. More wine options here.

Lastly, we visited Pomaire to see the ceramic craftmanship. I think this is my least favorite tourist destination in all of Chile but we made sure to enjoy our time there either way. I did buy a ton of ceramic pans and other cooking things and had my fair share of empanadas lol. Again we arrived by bus (from San Borja Terminal 2nd floor – Estación Central stop of Metro lines) since there are plenty of them going everywhere and they work well. Ojo/warning – week days are not as easy for arrival but you go same spot in the Terminal but head to Melipilla where you change to another bus (micro) to Pomaire (change of bus should be quick enough).

Now all friends have returned home and I must pack and move out of my apartment and off I´ll go on a few trips…one being Seattle in 1 month from today.

Love visitors as I always meet someone new and increase my ever expanding circle! Thanks for visiting!

More entries on travel in Chile.

Most call me T and no one ever seems to know where I am.

Hope to inspire you to see the world and give you the info you need to just go.