I have been trying to run in each country on my trip. I was worried about running in Asia, especially Vietnam because I’d heard air quality isn’t great and that is something that does stop me from running, as it should for my general health. Right before Viet Nam I was in Hong Kong (HK) for a week. There It wasn’t until my last day that I convinced myself to run, interestingly enough the air quality in HK was fantastic…but the insane amount of people, cars on the streets and the heat/humidity deterred me. Once I did run though it was great and I actually did find plenty of places to run that weren’t crowded.

So once I got to Ha Noi in Viet Nam nothing got in my way, not the motorbike traffic, the oven heat with dripping humidity nor the air quality! It did help that my first day was a Sunday and Ha Noi closes some roads (for instance around Lake Hoan Kiem) in town all day to give exercise a chance ha ha…but my 2 pm decision to run could have been avoided lol.

From that first run I pretty much decided to run in all cities (well I skipped maybe 1). I didn’t run every day while in Viet Nam but at one point I did challenge myself due to boredom to run 7 days in a row since I don’t have my usual race goals…one must get creative!

In big cities, Ha Noi and Saigon air quality can be shit due to the amount of motorbikes (other cities might destroy the air by burning trash…) but you can check online to see current air quality and decide how worth it is for you. Most days were hazy so air wasn’t clean per se…for example my second time running in Ha Noi (again at 2 pm lol) the air when I woke up was horrible and I wasn’t going to run but it rained and the air was cleaned so I did run only to learn (cough, while running) that it returned to horrible air only 2 hours after the rain…yuck! Luckily I mainly ran in the botanical gardens to get the cleanest possible air..(short distance inside there so whole run wasn’t there but still…A for effort!)

Even with the many motorbikes in Viet Nam, this was actually something I loved…since they were quite great at maneuvering around everything in their path running alongside them was easy…you just had to run with major confidence especially crossing streets. I am glad they didn’t honk much at me unless truly needed and that they are the same size as me running lol so even if they come close to my elbows I felt like I had power and some control too.

This experience running in Viet Nam also shows me no matter where in the world you are…if there is will there is a way…although I am sure living there and running can have it’s challenges and moments of frustrations.

I was also worried about dogs attacking since they are more likely to carry rabies in a 3rd world country. No problem here either since the gran majority of dogs got scared and hid when you got close…sadly because they are not treated well at all :/. In Viet Nam, dogs can be meals and the ones that look like pets well I am not sure they are but sadly I know they have definitely been abused because nearly none bark and again instead of welcoming pets they shrink away from you…so sad. So fear not the dogs instead be worried for them.

My favorite places to run were Phong Nha…cleanest air with awesome scenery and Hoi An….because you can see so much and you can jump into the ocean afterwards lol. Saigon actually surprised me for running…again weekend…but air was decent, though going early was a must (5:30 am is perfect…earlier than that no one is out…likely a safety thing).

Again I felt you could run anywhere really and you shouldn’t hold yourself back either…so get your shoes on, get out the door, run and explore…but do remember it is not always the perfect world for running paths in a 3rd world country. Go with confidence and if needed go slow…breathe, motorbikes will go around you. If not seek rice fields, city lakes, parks, botanical gardens, beach areas or rivers for potential areas to run. Don’t forget to check air quality, if needed wait or find a treadmill/gym.

Ha Noi:  Botanical Gardens (and surrounding government & Ho Chi Minh Memorial building areas – wide streets with sidewalks and trees), Lake Hoan Kiem (1 mile loop)…also West Lake has lots of space, 15/17 km around perimeter, (if air is ok). You could do Old Quarter too since it is an experience but go very slowly and with lots of confidence. I read somewhere to run the Long Bien Bridge…I walked it…guess you could and add Banana Island (but here I felt even walking the dogs were not ready for runners – might bite – maybe because they say this is where immigrants live)

Saigon:  Along river (near Zoo) – touristy run in District 10 any and everywhere but remember early am! Many runners found doing loop around Ho Chi Minh Square (near City Hall). If you want more I heard District 7 was nice too or I would even say near the Landmark 21 (there is a nice park there).

Hoi An – Old quarter because lots of cool streets/alleys to lose yourself in (and riverfront) but do it before 9 am because it gets sooo crowded. Also rice field paths are great (any direction outside of city has them)! The run from Old Quarter to beach was straight, flat and about 4.5 miles…or run near beach or on it…then take a dip in the calm water! Also saw on Strava that many run the Bridge (Cầu Cửa Đại)…equally on the other side in the rice fields would be amazing…many actually bike here though (also did and would recommend). In general everywhere is for running in Hoi An.

Sa Pa:  If not wet and slick – running down in the Valley would be awesome, also the lake in the middle isn’t a bad option (you will find plenty of locals running here early am). I instead ran a motorbike path down to a village you could do and loop back (access was through a road at very end of the crappy side of the lake park on right side if coming from the market).

Ninh Binh/Tam Coc: Around Tam Coc anywhere…if in Nihn Binh (city)…the river has a small area to run. This goes for nearly every city…along rivers is a good place to guess there is a path (especially in Japan and S. Korea)

Phong Nha: On the other side of the river there is a town (cross Cau Xuan Son bridge and go right), loved running here. Also in town there are plenty of spots since it literally is a one street town but best may be again along the river. Here I would not recommend running off trails or roads as there are still many bombs from the Viet Nam/America war that still remain undiscovered in the land 😦

CatBa:  In town and around the water was best but you could also rent a bike and go out into National Park for a sweet sweaty run.

Find me on Strava: Tee Gee

2 thoughts on “A Runner Running in Vietnam”

Most call me T and no one ever seems to know where I am.

Hope to inspire you to see the world and give you the info you need to just go. 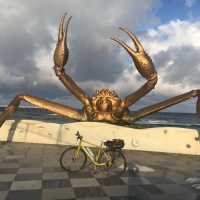 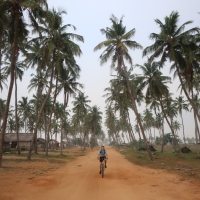