From Wassu I caught a sept-place (7 seater car) to Barra with the thought of maybe heading to Banjul (ferry leaves from Barra) or to the Northern beaches. I arrived moments before the president was to arrive by ferry to start his Tour of the People around the country so I waited for him with a friend I made on my morning horse taxi ride. She took the ferry after, I couldn’t decide between the ferry into the city or the Northern less visited beaches. I wandered around, ate, saw Fort Bullen nearby which was apprently the only fort built to bring slaves back to the homeland after it being abolished and finally I got money from the bank! I never exchanged all the cfa (I had just over 10,000 cfa left) since I wanted some for the return to Senegal which omg is a whole other story! Anywho I decided on the Northern beaches in the end and headed that way…A tough decision because in Banjul there was a football match The Gambia v. DRC Congo (World Cup decider match) they tied…I should have went…but oh well!

Before I jumped in a van I met a Bumster (or maybe a guide). I was avoiding southern beaches because of Bumsters (and tourists too). I have encountered them on a previous trip to Zanzibar (Tanzania) before and was not interested in encountering them again. Bumsters are men that usually roam touristy beach area and look for single female tourists (generally white ones) to take care of and treat generously in hopes of them falling in love, giving them money or eventually granting them a visa. They are very annoying and very persistent. I am not sure how but they always find you, literally hard to escape them…in Zanzibar the only way I found escape was going to a restaurant where they weren’t permitted to pester clients. They are far different than my many 24 hour friends, as I call them, from my Senegal trip that just talk, are kind, pleasent, good company and go their separate way. Anywho Bumsters come from The Gambia and this one was willing to go with me and make sure I arrived fine, of course I said no but I took his advice and got water before leaving at least because I was headed to a village he said and there might not be water or food…well there is always at least a Boutik (corner store — mini market) to get something to ‘survive on’ like my sardine sandwiches in Guinea lol.

The journey was about 30 minutes but it started off with me missing my stop…oops. Then I saw on the map (I use maps.me often) that it was closer from where I was to walk than walk back to the main road in (which I passed already), mind you there I might find a vehicle, but oh well. So I walked the 3km to town through the fields. As I approached town I was steadily gaining a fan club of children which in the end turned into a dancing parade… quite welcoming according to me ha ha. Here the children asked for bottles, meaning here they were even more poor then the last town, needs were simpler. Also they said Tubab so much I realized they don’t see many of us but enough…they were definitely excited for my arrival!

Once in town I followed the map where the dot was for the hotel… it was very incorrect…there was not a hotel there only houses…the residents told me there was one nearby so I started walking that way…after sweating through another 3km with my bag, trudging sand, not finding a river crossing or hotel, annoyed by a man who knew nothing but was trying to help I turned around…I walked fast and caught up to the boys who had paraded with me on the journey until the unhelpful man appeared…and was back at the residence where the hotel was supposed to be because asking if I could take their for a bed if I didn’t get to the hotel…So the thing I told me mom about that could happen and she worried about happening, happened…I arrived somewhere without a hotel and had to stay with the locals. Which to her disapproval, I believe, may have actually been the best part of my trip!

I ended up staying 2 nights since the neighbor and the family I stayed with created a plan for the next day. I had my own room with mattress, was surrounded by lovely people, was fed delicious fresh food and got to be a part of the village for a few days. I would have stayed just one night as to not bother the family but after our excursion the next day we arrived too late for me to leave town since I didn’t want to travel in the dark.

My dinner was watermelon, a whole one, lol because it was watermelon season in the region…you could get a big one for a $1 on the road…awesome! Watermelon for dinner kept me full, was healthy and just right! Don’t worry breakfast and dinner (we skipped lunch) the next day was rice with absolutely delicious fish the father caught overnight and some more watermelon of course.  We ate out of a bowel on the floor together…something I knew might happen on my trip as that is literally how people eat here…and I was excited to finally have the chance to be a part of it (nothing I was going to force just a desired part of the culture I hoped to take part in).

The next days adventure was to Jinack, a small island village near the border (the same place exists in Senegal but is spelled Djinack for French speakers and is a separate town), where the hotel they thought I wanted to walk to in 30-40 minutes was…nearby. I was actually never intending on going to this town but was pleased to have gone because of them.

To get there we borrowed a neighbor’s canoe and the 3 of us were off on a new adventure ha ha (life happens right)! The boys paddled, I scooped out water and switched with one of the boys every now and then so he could rest. By canoe we took about 1.5 hours, we were against the current the whole time…poor departure planning lol. We arrived to the area, left the canoe and walked 20 minutes through dried swamp land to a lagoon which was across from the island where Jinak village actually resided. To get to the village one boy called across the lagoon for transport as we waited in the shade. Once we were in the village we made some visits to the family and friends of theirs before heading to the beach. I had bought a bag of lollipops so I slowly handed them out to children along the way. After our visits we walked to the beach…a good hour walk with some Nigerian beats they played on a speaker as we walked past children hurding cattle (tooo young…maybe 3 and 6 years old :(, even my friends commented about it…), some marijuana farms and finally to this nice, chill hotel on the beach where we chilled and I swam in it’s calm waters with almost no one around. We stayed a bit then headed back to repeat the whole adventure.

**Let’s recap —-that day I canoed to an island with 2 guys I met the evening before, traversed a swamp, crossed a lagoon, walked through a village, into marijuana fields and to a beach to swim then repeated it all again…omg yes this all did happened!

We returned late, the boat was due to the neighbor by 5 so he could fish…but one boy was enjoying those fields we walked through with some friends of his for too long…well that and we had to bale out the boat…after hours sitting it was half full of water now. Luckily we had the current for the ride back…ha ha that was until we entered the tributary where their village was located…we arrived just after 6 pm sooo, being late, I stayed another night.

I said my good-byes, shared some tea and of course watermelon lol, since I would leave on the early morning taxi out…which I barely made…it was the last of the morning (7am) and it was full but space was created for me. From the main road I caught the first bus to the border thus ending my trip in The Gambia. Sadly leaving felt forced as I definitely could have stayed longer there…to fill more stories on these pages obviously…but Senegal was waiting…or at least that is what I thought

—In case you missed the rest of the Gambia stories check the other 2 stops.— 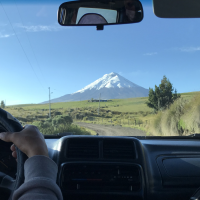 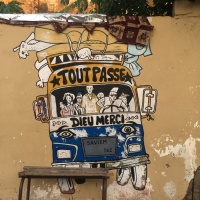