The Gambia is a tiny country enveloped by Senegal…aka all borders are Senegal and then a bit of coast line. It is an English speaking country, from former British rule, that has the huge river ‘Gambia’ running through the middle. Most tourists come from Germany, France, Holland, Belgium, UK, and other European countries and stay on the Southern coast the whole time. I avoided that coastal area where the tourists are like the plague which made for a bunch of interesting stories between 3 stops over 5 nights.

I found The Gambia (always with ‘The’) really poor, in fact everyone immediately assumed I was a Peace Corp volunteer (a US government body that sends Americans to poor regions of the world to help in various aspects of development). When I told the first people I met I was American their eyes went from uninterested and dull to bright shining stars…and all of a sudden, now, they were very interested. Americans draw a lot of attention because to many we are $$$ and great visa potential. I’d never seen this reaction for saying I was American so I took it as a sign and quickly became Colombian from that day forward…which was way better. The conversation quickly shifted to the excitement of Football (soccer) and all the players they knew from Colombia…James Rodriguez being the most well known, Cuadrado, Mina and finally Falcao. These were exciting conversations as each person I met named them, I felt as though I was back in Colombia again and this was a way better conversation than being American…lol. Most only knew Football, they didn’t seem to know it was a Spanish speaking country or where exactly it was (nor was any drug related thing mentioned which was great to not hear for once)…the only people I couldn’t fool were the guides ha ha who had met enough Americans to know my accent…I still went along with my Colombian story.

My first stop was Soma, pretty much the middle of the country. I was coming from Casamance (South Senegal) after a few days there speaking French and was very excited to soon speak English…after all the mix up and challenge of switching from French to Portuguese to French again…I was nothing short of confused and ready for my first language! I arrived at sunset to find only a handful of people who spoke English…lol! Most English speakers are in Banjul (capital) or along the touristy coast.

I headed to look for a hotel but quickly remembered I needed local currency, so I went back to a bank I passed. The bank had no atm…I learned from the guards that basically there were maybe 5 atm locations in the country…hello underdeveloped finances! I had anticipated that I would need to exchange money since they don’t use the CFA but the Dalasi and had brought only 50,000 cfa with me…so I exchanged some…having no clue about the exchange rate I was ripped off…oh joy!…but I only changed 10,000 for this very reason. The next morning I exchanged more money at the correct (or closer) exchange rate (recieving 15 dalasi more!) because I would need it since my next stop didn’t have an atm either. The closest was 30 minutes away (Farafenni) or 3-4 hours away either direction lol. I chose to follow a budget instead.

There were 2 lodges (when I say lodge maybe think run down motel in Mexico for reference) in town…one with a big concert and high prices (nothing that high, just I knew I was being ripped off) so I opted for the other but definately walked too far…almost to the next village…but luckily I was greeted by a police officer who spoke English (he works in Banjul and was visiting family over the weekend) and showed me the lodge I had passed (um no sign…). This was half the price (400D), same feel to the room and quiet! 🙂 After dropping my bags he came with me to dinner and to find ice cream lol…because he simply left the house to find something to do…I created the something…and no he didn’t expect anything more than a conversation (not even my phone number like all other 2 second male encounters lol)…I enjoyed his company and laughed when he showed me he really was a cop…he had handcuffs on him because he was used to always being prepared…safety I had! 🙂

**Highly recommend going to Farafenni if passing and staying, there is more going on, the atm, more hotels, etc. I went to Soma because I heard the road was better on the South but I later took the North road and it seemed fine to me (maybe anything was better after Guinea-Bissau ha ha…no but really roads were fine).

From here I have separated the stories out because despite the size of The Gambia and the few days I spent there this country is packed with places to discover, to get lost in, to surprise you and most importantly to learn from plus it has friendly people with tons of rich experiences. Let’s dive in and see really what the smiling coast offered me!

**Also, they call it the Smiling Coast literally because so many smiles are encountered and this I found in it’s children, literally bright lovely smiles everywhere! 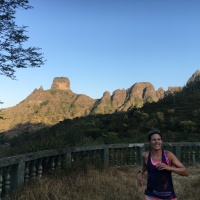